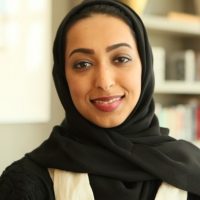 Sheikha Bin Dhaher graduated from the American University of Sharjah in 2005 with a BSC in Visual Communication. She worked as creative director at Dar Dubai Printing & Publishing for the Jumeirah Beach Magazine. She is currently contributing to a book project for the Sheikh Zayed Grand Mosque in Abu Dhabi. From October 2008, Sheikha is currently continuing her postgraduate studies at Central Saint Martins School of Design in London. Sheikha gets her inspiration from English and Arabic typography, layout, illustration, film, two-dimensional motion graphics, theatre of the absurd, satire, surrealism and nonsense.