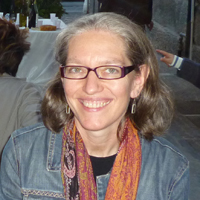 My paintings are abstractions, mostly of landscape, created by a process that draws equally upon my immediate experience and painting’s formal elements (color, line, form) to express the essentials of the subject matter. Benefiting from oil paint’s pigment-laden physicality and workability over time, I simplify images and also return to the canvas over and over, mixing memory and reflection into the process, to fully realize my vision.

Very often my compositions spring from travel sketchbooks entries containing cursory visual notes made while on a moving bus or train, or sitting in a café. Elements of architecture frequently define the planes of space of these urbanscapes. Back in my studio I choose some of these images to paint and journey with me as I explore their underlying structure.

I also create landscapes that I call “sportscapes” or “soccerscapes” inspired by the visual pageantry of the FIFA World Cups. During the tournaments, I make a series in which each drawing is realized within the time constraint of a live TV broadcast. Later, I revisit some of these on canvas where, in a sense, I re-open the game to further examine its unique combination of motifs and rhythms.

I grew up in the Philadelphia area and attended Sarah Lawrence College from which I received my BA in December 1977. I also studied at Tyler School of Art’s campus in Rome (1977-78) and attended evening courses at Philadelphia College of Art (1978) before moving to New York City in December 1978. Here, I attended Hunter College and received my MFA in May 1982. I continue to live and work in New York and travel frequently to Italy.

Over the years my work has been recognized by an artist grant from Artist Space, NY (1989), two dealer’s choice awards from Art Initiatives (1994), honorariums from Il Servizio Patrimonio Artistico, Napoli, Italy (2001) and from William Paterson University in Wayne, NJ (2003), and a residency in the Springs from the Hedda Sterne Foundation (2001). It is in a number of private and public collections including Roberta and Ron Berg, Germantown, PA; Connecticut College Print Collection, New London, CT; Kiwi DeVoy, Atherton, CA; Franklin Furnace, NY; Jean-Noël Herlin, NY; Consulate General of Italy, NY; and Pedro Tabernero, Sevilla, Spain.