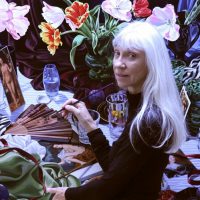 “Art stretches us by being several things at once. It can be a ripe fruit ready to fall off the canvas onto the floor, but also, when viewed close, a collection of brush strokes on a flat surface. The landscape that I place in the background is a flat surface but simultaneously a space in which the still-life objects reside. The objects are ordinary, but simultaneously monumental by virtue of their relationship to the majestic landscape in the background. Small scale animals and figures in the landscape are potent reminders of time, scale and our relationship to the natural environment. A vase of flowers before a dramatic deep space makes a comment by juxtaposing the mundane with the sublime, and also finds a potent emotional interaction that enhances some aspect of a past painter’s message. These dualities give me a rich palate for exploration. I set up my arrangements for color and formal compositional elements as well as for emotional and conceptual content. Content often derives from interactions that are discovered by trial and experiment. I enjoy finding resonance that did not at first occur to me.” – Sherrie Wolf

Sherrie Wolf graduated from the Museum Art School, now the Pacific Northwest College of Art, Portland, OR, in 1974 and received an MA from the Chelsea College of Art in London, England in 1975. She began exhibiting her work in the mid 1970s while teaching art at PNCA. Her work is included in such collections as The Vivian and Gordon Gilkey Center for Graphic Arts, Portland Art Museum; Hallie Ford Museum, Salem, OR; the Tacoma Art Museum, Washington; City of Seattle; and Washington State Art Collection. Wolf has also been included in multiple curated group exhibitions across the country. In 2012, Wolf’s work was presented in a solo exhibition at Northern Arizona University in Flagstaff, and earlier in 2014 she was featured in a solo show at the Long Beach Museum of Art in Southern California.