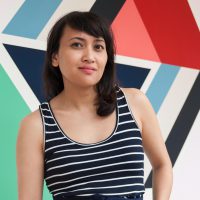 Known for her fascination with color and composition, Sinta Tantra’s work is an experiment in scale and dimension, a hybridity of pop and formalism, an exploration of identity and aesthetics. Her decade of work in the public realm produced distinct color abstractions which wrapped around the built environment, enlivening and transforming them in the process. Her work now ranges from small painted canvases to huge architectural installations, from bold, tropical color to a Calder-like minimalism. It occupies a space at the intersection between painting and architecture, striking a fine balance between the two-dimensional and three-dimensional, decorative and functional, public and private. Themes within Tantra’s practice include the slippage between pictorial and physical space, of turning something ‘inside out’, and how we as bodies become submerged in surface and structure.