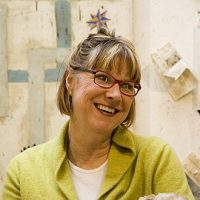 Carnwath received her Master of Fine Arts degree from the California College of Arts and Crafts in 1977. She taught at the University of California, Davis for 15 years and in 1998 became Professor in Residence in the Department of Art Practice at the University of California, Berkeley where she continues to teach while maintaining a studio in Oakland. A recipient of a Flintridge Foundation award in 2002, a 1994 fellowship from the Guggenheim Foundation, two National Endowment for the Arts Fellowships, and the San Francisco Museum of Modern Art’s 1980 SECA award, her work has been featured in major periodicals, including ARTnews, Artforum, Art in America and the New York Times. Carnwath’s paintings were the focus of a major exhibition surveying the past 15 years of her career at the Oakland Museum of California in the summer of 2009. Her work has been the subject of two monographs: Squeak Carnwath: Lists, Observations & Counting published in 1996, and Squeak Carnwath: Painting is No Ordinary Object, published in 2009. Her works are found in many prestigious collections including the San Francisco Fine Arts Museum, San Francisco MOMA, and the American Academy of Arts and Letters in New York, among others.