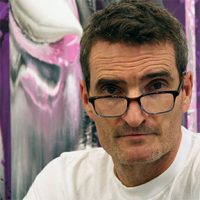 American artist Stanley Casselman was born in 1963 in Phoenix, Arizona; earned his Bachelor of Arts degree from Pitzer College, California; and currently lives in New York City. In his work he reveals the tranquility in the subtle change of coloured streams of light using acrylic on polyester fabric adds a textured surface to the work as the light seeps through it, capturing the viewer’s attention for the duration of the cycle and beyond. The curiosity in understanding our surrounding and purpose entrenched in the artist’s practice is evident in his strive to capture the ethereal in a lucid form. As Casselman states “The who, what, where, why and how questions began for me in my childhood. Following these notions has put me on a path embracing limitless thought and combined with the deeply cathartic nature of the creative process I’m kept questioning, humbled and ever striving to embrace the unknown through the only place I find absolute logic: pure abstraction”.

Casselman rose to art-world fame in an unusual way: he answered the critic Jerry Saltz’s call for a knock-off Gerhard Richter painting. But Casselman’s practice goes far beyond that. He was an established painter of geometric abstraction long before he started creating Richter-like works using a 10-foot squeegee. Since then, he has elaborated on this painting style, making it his own as he searches for logic through abstraction. “Each painting is its own visual story that transcends explanation through language,” Casselman has said. “The process and the result [are] emotion and energy put forth in its rawest and purest form.” His work has been extensively exhibited both domestically and abroad, including shows in London, Vienna, Basel, Seoul, and Hong Kong.