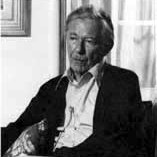 Born in Montreal, Quebec, he studied art under Charles Maillard, Henri Charpentier, Maurice Félix and Joseph St-Charles at École des Beaux-Arts de Montreal (1929-1935); with Edwin Holgate at the Art Association of Montreal (1936). From 1937 to 1939, he would spent his summers painting in Charlevoix, Québec, with fellow artists Jori Smith, Jean Paul Lemieux, and Jean Palardy. In 1938, he assisted Edwin Holgate in the creation of a fresco for the Canadian pavilion at the New-York World Fair.

In 1939 he enjoyed the rare honour of being invited to have his first solo show at the Musée National des Beaux-Arts du Québec while still a student. He also exhibited with the Contemporary Art Society that year. Still in 1939, he received a Quebec Provincial scholarship to study in France for four years but WW II forced a change in his plans and he was allowed to study on the American continent and chose Mexico. There he became interested in fresco painting and approached José Clemente Orozco through teacher friends. Orozco, who had just begun a fresco for the hospital Jesus de Nazareno in Mexico City, agreed to let him help with some part of the work. Cosgrove stayed with Orozco until the completion of the fresco. It was from working with Orozco that Cosgrove felt a new assurance and directness not experienced in his previous work. During his four years in Mexico he also did still lifes, landscapes, portraits, street and market scenes.

He then returned to Canada at the end of 1943 where he concentrated on painting, took a part-time position teaching at l’École des Beaux-Arts and signed a contract with the Dominion Gallery in Montreal. He also held a solo show at the Art Association of Montreal.

In 1953 Cosgrove was awarded a Government fellowship to study in France (1953-1954) with good friend Goodridge Roberts. Also in 1953 he was active in the field of textile designing, working with a group of artists which included Paul-Émile Borduas.

He had also worked for wider interest in modern fresco painting in Canada, particularly in churches, and he conducted classes in this medium at the École des Beaux-Arts. He completed a fresco for the entrance of the philosophy and science wing of the Collège de Saint.Laurent near Montreal.

In 1958 he left l’École des Beaux-Arts de Montréal to devote his full time to painting but went back briefly to teach drawing in 1960. He was elected member of the Royal Canadian Academy in 1967. In the next decades he mainly devoted himself to painting and exhibiting his work. He died in Montreal at age 91.