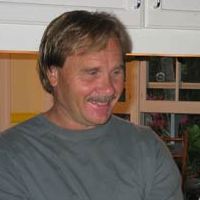 A Hawaiian by birth, Stephen Scott Young has made Florida his home since his mid-teens. After attending Flagler College in St. Augustine, Young studied printmaking at the Ringling School of Art in Sarasota. He has also adopted the Bahamas, where his wife’s family lives, as a second home and makes regular visits there to paint. In the manner of Winslow Homer and Andrew Wyeth, he familiarizes himself with the landscape and the people, the light and the color, so that he can paint them with empathy and conviction.

Again like Homer and Wyeth, Young prefers the watercolor medium, which allows quick, on-the-spot sketches. Young’s painting process begins with exploring a neighborhood, discovering its interesting aspects, perhaps engaging some residents in conversation, and then setting about capturing on paper the essential qualities of his subjects, first in swift graphite drawings. He enhances a few of these with watercolor, adding color and detail. With these studies in hand he returns to his studio to create larger, more finished sketches and ultimately the final work. Despite his commitment to realism, Young does not use photographs as an aid, preferring instead to edit and alter according to his artistic needs. Often he combines elements from different scenes, synthesizing them into a harmonious whole. Few viewers are aware of this artistic license; most are convinced by his realism that each scene is a straightforward documentation.

Although Young paints landscape, still life, and genre scenes, his forte is the portrayal of figures, either singly or in small groups. His greatest success has been with the young and the old, perhaps because they have more time to spend with the artist and are less self-conscious. He uses his settings – porches, old barn doors, picket fences – to frame his subjects.

Invited to Greenville, South Carolina, in connection with his solo exhibition, In the American Tradition, Young was encouraged to seek out subject matter that appealed to him. Thus began the foundation for A Portrait of Greenville, a series of eleven major watercolors and two temperas commissioned by the Greenville County Museum of Art. By pre-arrangement, Young met six-year old Alicia Wardlaw at the Gassaway Mansion, the Museum’s first home. The artist, who often paints children, found her to be a natural and lively model.

Compositionally, Young has set up a series of dynamic contrasts between his sitter and her setting: her youth versus the antiquity of the house; her curving, relaxed position opposed to its rigid classical geometry; and her bright hat and deep skin tone against the plain whiteness of the old doorway.