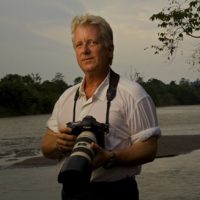 Steve Winter has been stalked by jaguars in Brazil, charged by a grizzly in Siberia, and trapped in quicksand in the world’s largest tiger reserve in Myanmar. He’s flown over erupting volcanoes and visited isolated villages where residents had never before seen a blond foreigner—or a camera.

Growing up in Indiana, Winter dreamed of traveling the world as a photographer for National Geographic. His first camera was a gift from his father on his seventh birthday. Over the next few years, Winter’s dad taught him the basics of photography.

After graduating from the Academy of Art and the University of San Francisco, Winter signed on as a photojournalist for Black Star Photo Agency. Since then, he has produced stories for GEO, Time, Newsweek, Fortune, Natural History, Audubon, BusinessWeek, Scientific American, and Stern, among other publications. His nonprofit and commercial clients include UNICEF, Merck Pharmaceuticals, Kessler Institute for Rehabilitation, and others.

Winter lives with his wife, son, and pets in New Jersey.