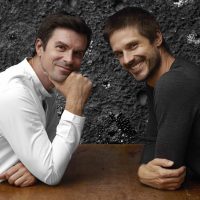 Steven Ladd and William Ladd are New York-based artists and brothers. They grew up in a small close-knit community on the outskirts of St. Louis, Missouri, the third and fourth children in a loving and supportive Catholic family.

Steven, the older brother, was fascinated by sewing as a child. He began making his own clothes at Rockhurst University in Kansas City, where he became deeply involved in the costume department and built an independent study merging performance, design, and art. He graduated early, and left the Midwest to join William in 1999.­­­ William’s passion for beading began at 15, when a friend introduced him to macramé. Three years later, he left St. Louis and travelled the world as a fashion model with a bag of beads, finally settling in New York City.

Today, Steven acts as global ambassador, dreamer, thinker, communicator, and boundary pusher. He is the sewer, the book-binder, the pattern-maker. He makes drawings. He lays out plans for the future. William is the builder, the head of production, the disciplinarian, the beader, the performer. He meets every deadline and creates objects of breathtaking intricacy.

The brothers began their formal artistic collaboration in 2000. Their first creations were high fashion accessories for international designers, and their work was featured in an exhibition at the Musée des Arts décoratifs at the Louvre. Since then, they have explored many artistic avenues, in particular sewing, beading, drawing and hand-made books. Their pieces range in scale from tiny cast ants to murals over 40 feet square. Signature works include abstracted “landscapes” based on shared memories, people and experiences. The landscapes are displayed in grids on the wall or hidden in stacked boxes, then opened and laid out in formal, ritualistic performances. Their work is hand crafted and labor intensive, and usually involves recycled materials. Recurring themes include childhood memories, faith, and people and places that have impacted their lives.

Steven and William are deeply committed to involving all kinds of people in their practice. They engage directly with school children and their families, special needs groups, inmates at correctional facilities and hospital patients. They dedicate themselves to three core values–Spend your Life Doing What you Love, Be Focused and Disciplined, Collaborate.