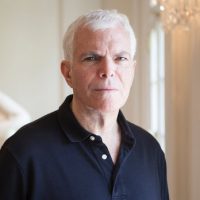 Saida XXXVIII is part of a vibrant, colorful series of large-scale geometric works made of limestone, copper, or plated steel boxes that combines the satisfying resolution of geometry with the playfulness of Op Art. These works have been described as “timeless and contemporary, distant and familiar, severe and delightful, rigorous and surprising,” (“Steven Naifeh, Found in Translation,” Columbia Museum of Art, May 18–September 1, 2013).

Steve Naifeh artistic practice explores the kinship between patterns and colors of traditional Islamic art with the shapes and minimalism of the geometric abstraction movement of the United States and Europe. “These two fields of art are incredibly important to me [and I hope to] marry them in a way that will allow the average viewer to look at them and, without being steeped in the art history of either movement, see them without seeing them as either medieval Islamic or recent international, but as both at the same time.”

Naifeh is an Arab American whose grandparents were born in a part of Syria that is now Lebanon and Jordan. As the son of U.S. diplomats, he grew up not only in the U.S. and Pakistan, but also throughout the Middle East — in Jordan, Iraq, Iran, Libya, Oman, and the U.A.E. Born in 1952, Naifeh holds a Bachelor of Arts degree from Princeton University, New Jersey (1974), as well as a law degree (1977) and Master of Fine Arts from Harvard, Cambridge, Massachusetts (1979), and honorary degrees from the University of South Carolina, Aiken (1998), and the Juilliard School, New York City (2012). His PhD dissertation on artist Gene Davis was published in 1982. He co-authored, with Gregory White Smith, the Pulitzer Prize-winning biography of Jackson Pollock, as well as the New York Times bestselling biography of Vincent Van Gogh. His geometric abstractions have been exhibited worldwide, in Nigeria, Pakistan, Abu Dhabi, and Princeton, New Jersey, among other locations.