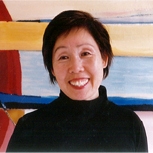 Born in Busan, Korea, Su Kwak grew up near the seashore and the mountains of her native country. She moved to the United States in 1973 to attend college at the University of St. Thomas in Houston and later completed her MFA with honors at the University of Chicago. Kwak is represented by the June Kelly Gallery in Soho, New York City, and the Sun Gallery in Seoul.

Based in nature, memories of moon and water, waves and mountains, Kwak’s abstract paintings yield a metaphoric message of healing – of relieving suffering and desolation by restoring life to spiritual as well as physical health. On close examination of the painting surfaces, one begins to fathom the complexity of their construction. Quite strikingly, Kwak often cuts and stitches the surfaces of her canvases. There are positive and negative shapes of canvas, cut out and reapplied. In the words of Whitney Museum Curator Elisabeth Sussman, Kwak’s “paintings, both in the acts of their making and in our acts of contemplating them, have the power to heal.”

In 2000, Kwak received an award from the Republic of Korea for helping to advance Korean culture overseas. The Maryland State Arts Council gave her an Individual Artist Award in 1998. She was selected for the World Calligraphy Biennial of Korea in 2003 and 2005. She also was selected for juried shows at the Three Rivers Art Festival, the Queens Museum and the Fine Arts Museum of Long Island. The U.S. State Department twice chose her for its “Art in Embassies” program, displaying her work at ambassador’s residences in Seoul and Geneva. In 1982, Kwak was artist-in-residence at the Henry Street Settlement Arts for Living Center in New York City and in 1980, she received the Fairweather-Hardin Gallery Prize for excellence in the fine arts from the University of Chicago.

In addition to painting, Kwak has published a memoir entitled Light in the Heart: Love and Art (2002).