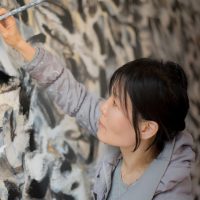 Suling Wang’s upbringing in Taiwan and her family’s folk customs influence her approach to painting. For example, her mother would pray to the sky, shatter a ceramic bowl, and then bury the shards in the garden, performing this ritual to bring good luck and a peaceful mind. Similarly, in her artistic practice, Wang shatters forms into abstraction, piecing them back together to yield a clearer conception of herself as an artist. Her work on The Singing River 2 began by placing the canvas on the studio floor, working freely and spontaneously. She then positioned the painting upright and defined forms, repeating this process to create layers and introduce a sense of space. A sizable undertaking, the project took nine months and prompted Wang to extend her studio to accommodate the painting. Almost thirty feet wide, it is her largest work to date.

Wang’s large-scale paintings feature bold, gestural brushstrokes that suggest natural forms. Dynamic, flowing contours flesh out roiling water and a changeable sky—their rhythms articulated with color. Wang is familiar with the principles of Chinese landscape painting, as well as the theory and techniques of abstract expressionism. Further, as a student in London, she had a unique opportunity to follow “in Turner’s footsteps.” She traveled around Switzerland, painting the same mountainous vistas as J. M. W. Turner. In The Singing River 2, the viewers may catch glimpses of Turner’s light and the energy of his landscapes. But there is also the influence of Chinese calligraphy, its mark-making and gestural qualities. Wang draws on both Eastern and Western aesthetics, extracting particular elements and reinterpreting them on her canvas. She welcomes participants to wander into her picture plane and, like ancient Chinese scholars or European romantics contemplating mountains and rivers, to lose themselves.

Wang lives in Taiwan and the United Kingdom, earning her Bachelor of Arts degree at Central Saint Martins and her Master of Arts degree from the Royal College of Art, both in London. Much of her work addresses the conflict of living abroad and themes of distance and location. Her work may be found in public collections such as the Museum of Contemporary Art in Los Angeles, the Solomon R. Guggenheim Museum in New York, and the Utah Museum of Fine Arts in Salt Lake City.