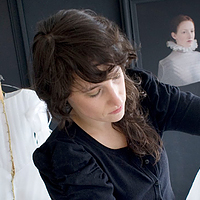 ‘A textile background’ is how Suzanne Jongmans perfectly describes the impact of her observations on her mother’s and grand-mother’s hand-made textiles from her childhood and the clothes they sewed for themselves and their families.

Growing up in an atmosphere of crafting contributed to the young girl’s future as an artist. When she was eight, she moved house with her mother and brothers and was given her own room with a closet which she converted into a doll’s house of fantasies, a theatrical den she decorated and which unwittingly revealed an early interest in the use of space and design.

Alongside that focused passion, Suzanne was drawn to her mother’s art books, particularly those of 15th,16th, and 17th century painters. That interest grew at the Art Academy in Tilburg where her lecturer showed her books from his private collection and she studied works of Hans Holbein the Younger, Vermeer and Clouet for their radical compositions and play with light. They obviously influenced her future sculptural and photographic works.

She was drawn to this Art Academy because of the department Theatrical Design but when it closed down she decided on Photography and Textile Design building up conceptual and spatial ideas in multi-media installations. She extended work with textiles, photography and film and introduced traditional craft work which looped back into her childhood.

Since her academic training, Suzanne has retained a theatrical element in the work and her multi-media processes and productions now define her as a seamstress, pattern cutter, creator of sculptural forms, designer of costumes and a photographer who compresses images from their third dimension to the flat print.