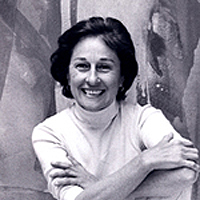 Born in Philadelphia, Pennsylvania, Sylvia Wald became a pioneer of American Modern art during and after World War II. The socio-political environment of the 1930s and 40s, and Wald’s deep-rooted commitment to social engagement, shaped the artist’s early output and became a defining characteristic of her work. She is recognized for revolutionizing the silkscreen technique and pioneering its application to fine art, pushing the boundaries of material and process to create textural effects and dimension. In the late 1950s, Wald went through a brief period of gestural abstraction, in print and on canvas, before beginning to work almost exclusively in three dimensions until her death. Wald’s works are featured in many national and international collections including the Metropolitan Museum of Art (New York, New York), National Gallery of Art (Washington D.C.), and the Victoria and Albert Museum (London, England), among others.