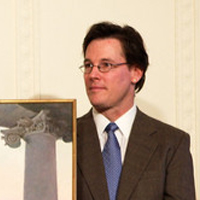 T. Allen Lawson is drawn to the quieter side of life. Over time he has developed a discipline of patiently observing and studying the often unnoticed rhythms and subtleties of his surroundings. In his paintings he strives to build layers and textures with pigment to create the abstraction and nuanced depth he feels in nature and the world around him.

Born and raised in Sheridan, Wyoming, the American West is an integral part of him. Tim studied drawing and portraiture at the American Academy of Art in Chicago. He furthered his formal studies attending the Lyme Academy College of Fine Arts in Old Lyme, Connecticut. A lifelong student, his dedication to and love of his profession is always evolving as his interests and influences continue to challenge him.

T. Allen Lawson has won numerous awards including the 2016 Directors’ Choice for Outstanding Landscape and the Robert Lougheed Memorial Artists’ Choice Award, both at the Prix de West; and the 2010 Founder’s Prize, Lyme Academy College of Fine Arts. In 2008, he was chosen by the President and First Lady to create the painting for the official White House Christmas card. His work is shown in public collections, including the Buffalo Bill Center of the West, Cody, WY; Denver Art Museum, Denver, CO; Farnsworth Art Museum, Rockland, ME; Forbes Magazine Collection, New York, NY; Portland Museum of Art, Portland, ME; Yale University Art Gallery, New Haven, CT; and the Smithsonian Institution, Washington, DC.

He lives with his wife and five children in Rockport, Maine.