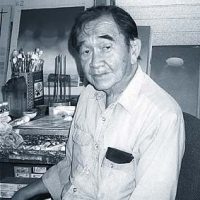 Born in Kaupakalua, Maui, Sato Tadashi Sato is known for his nonobjective paintings, mosaics, and murals, some inspired by his experiences, including skin-diving, during his boyhood in Hawaii. His goal with his artwork is convey a sense of serenity, balance and light and space.

Sato had a father who was a pineapple laborer, merchant, and a calligrapher, and his grandfather was a sumi-e artist. Sato attended Kamehameha III School and Lahainaluna High School. When Tadashi Sato was in the third grade, the entire school held an assembly around the flagpole and he received a prize of $2.50 for a poster contest. He attributes that event to being his initial inspiration to pursue art. At Lahainaluna High School, Sato was the cartoonist for the school’s annual.

Following his graduation from high school, he volunteered to serve in the Army along with many Americans of Japanese ancestry in Hawaii, and trained with the 442 Combat Infantry Regiment. During WWII, Sato reproduced and identified locations on maps translating from Japanese to English. He also served as a translator and interrogator in the New Guinea and Philippine Campaign. Sato returned to Hawaii in 1946 and was employed by the Halekulani Hotel in Waikiki, which later would purchase many of his paintings.

Sato attended classes at the Honolulu Academy of Arts from 1946 through 1948 with assistance from the GI Bill. There, he studied with the New York based artist, Ralston Crawford who was teaching at the Honolulu Academy of Arts summer session. Ralston assisted him in obtaining an art scholarship. Encouraged by Crawford and with a scholarship to the Brooklyn Museum School in hand, Sato left Hawaii along with his wife Kiyoko. In New York, he took classes at the New School and Pratt Institute, as well as at the Brooklyn Museum School.

At the Pratt Institute he experimented with various materials. During his second year, Sato did not want to be channeled into a professional occupation. Wanting his own personal freedom, he quit and returned to the Brooklyn Museum Art School. To make this change, Sato was required to transfer from vocational to avocational under the GI Bill. This was a turning point in his life.

Ralston Crawford also introduced Sato to the modernist painter Stuart Davis in New York, and these two teachers were an important influence on him. “Subway Exit, (New York,” 1954), an abstract rendering of a subway turnstile, clearly draws inspiration from Davis’ interest in depicting the shapes and rhythms of city life. Where Davis relied on bold colors, Sato already was working with a muted palette of black, gray and white, a range of colors that suited New York City’s underground terrain.

Though Sato moved away from the hard-edged abstractions of the Precisionists and the cubist-inspired abstractions of Davis, he retained their predilection for depicting flattened forms in space. This is particularly evident in “Captain’s Chair” from 1961, in which the flowing, organic chair form floats in the center of the canvas.

Overall, Sato spent a total of almost ten years in New York. He painted while traveling between New York, Japan, and the Hawaiian Islands. In 1955, Sato was awarded the McInerny Award and left New York to study in Japan. In two months, Sato consumed his grant money in cameras and equipment in his fascination of the life in Tokyo and returned home. In 1956, he went back to New York and painted and studied with other young American Japanese artists, Satoru Abe, Bumpei Akaji, Boy Okuchikubo, Jerry Okimoto and mentor, Isami Doi.

Returning home to Hawaii, Sato struggled to stay afloat in the Hawaiian art community. Through the tough times, he held onto his cultural and family values opening his home to a struggling actor and friend for a bowl of rice and tea from time to time. On one occasion, his friend stopped by wanting to give up his dream of becoming an actor. With the encouragement of the Satos, he auditioned and landed a part in the Broadway play, “Teahouse of the August Moon,” starring the British actor and film star Charles Laughton. At a party that was thrown for the cast, Laughton began sharing with a group of friends about his personal art collection. Sato’s friend, the new actor, interrupted the conversation telling them about Sato’s works. Intrigued, Laughton made arrangements to meet with the artist. Along with an entourage Laughton arrived, purchasing a number of paintings on the spot. From that day, Sato was able to work exclusively as a fine art painter.

In 1958 he exhibited at the Willard Gallery in New York and got very good reviews for his works, which at that time were nonobjective and comprised of compositions of hard-edged lines and shapes. Over time his hard edges softened into paintings that he describes as more mystical and metaphysical. One example would be ‘Reflections No.3-A’ (1958 oil on canvas, collection of Thurston Twigg-Smith). The forms would become more abstract in later years, as Hawaii’s natural environment, especially the sea, increasingly became the subject of his art. He also has created murals, a noteworthy example being “Aquarius,” at the Hawaii State Capitol rotunda.

A continuing motif in Sato’s work is the circle. Even clouds in landscape paintings are flattened into circles. Later circles are less associated with forms in nature and seem to represent universal symbols, such as the circle as a metaphor for wholeness. Sato works primarily with muted, soft colors, especially light greens and blues. Even in his early “Captain’s Chair,” with bright red for the chair back and a window in bold blue, the stronger colors have a lightness that merges with the overall soft tonality. In many of his recent paintings, a thin line begins at the top or bottom and connects separate elements, or it moves from inside one form to the perimeter of another, then moves aside, allowing the form to “push” the line. These subtle, dynamic lines seem to have sprung from the artist’s subconscious, their path apparently unplanned by the conscious mind and dictated only by the space they traverse. Sato’s subjects are simple a tree, a rock reflected in water, a breaking wave yet complex in their suggestions of light fragmenting the surface of the sea or natural forms emerging from a landscape. Many of Sato’s paintings are large.

Currently (2002), the soft-spoken Sato resides in Lahaina, Maui. The view from his studio overlooks the harbor and west Maui mountains, two subjects that are often depicted in his paintings. Sato’s favorite subjects are impressions, water, reflections and the beauty of Maui. “They are complete interpretations by myself of a particle scene,” Sato says. “So, the blue of the sky may not be the blue that everyone sees, but the composition of the painting itself will hold it correctly. I like to paint by memory because it gives me a little room to put my own poetry.”

He has exhibited extensively; including one man shows in New York, London, Honolulu, and Seattle. His work has also been shown at the Guggenheim, New York, Berlin Art Festival, the National Gallery, the Whitney Museum, de Young Museum of San Francisco, and many others.