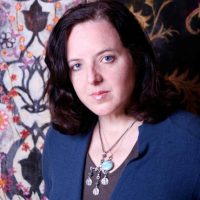 The central concern of Tamara English’s work is the movement of spirit in our lives and in the world. How does spirit move through the many layers of this world, from the unseen atomic particles to the unseen aspects of our psyches? Her paintings explore this question of spirit outside a particular belief system. The paintings integrate the visual vocabularies of quantum physics, Islamic tile-work, European illuminated manuscripts, and abstracted forms derived from the natural world. In particular the multi-layered paintings reference the rhythm and movement of the decorative elements found in mosques, Turkish dervish lodges, and medieval European sacred texts, becoming intersections for the visual language of different cultures.

The layers found in English’s work also reference the multiple layers of our world, from what makes up the H and the O that make H2O to the expanse of the oceans and the milky way. Other layers of our world include our inner experiences, including thoughts, emotions, beliefs, and longings. Sufi mystics have called this inner experience the macro world, and the physical world the micro world. with the awareness that the experience of the physical world is reflected by one’s inner experience. This concept has been a point of reference for English as she investigates the individual experience of spirit.

Quantum physics describes the universe as an ocean of particles in constant motion informing the physical and subtle worlds. In her work, English explores what animates these particles and the relationship between the seen and unseen worlds.

Tamara English lives and works in Portland, Oregon. She holds a BFA from Pacific Northwest College of Art. She has exhibited extensively in the Pacific Northwest. Her work has also been exhibited in New York, Atlanta, Boston, and Chicago. Portland visual art critic Richard Speer calls her work “luscious,” “seductive,” and “haunting.” In 2010, she was featured in a documentary about Portland artists called “Art: PDX,” directed by Andy Blubaugh. She has been awarded several grants from the Regional Arts & Culture Council, a Portland based arts organization. These grants have funded several solo exhibitions, included one in 2010 at the Portland Public Library. English is currently represented by Anka Gallery in Portland and Addington Gallery in Chicago. 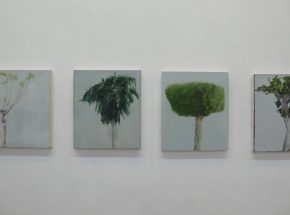