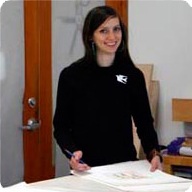 Tauba Auerbach has been fascinated by letters and penmanship since she was a child, when she wrote in her diary about inventing a new letter “A.” After graduating from Stanford University, she worked for three years as a sign painter, perfecting her skill in hand-lettering. Her works Yes and No are two of her
many explorations into the aesthetic and conceptual potential of letters and words. In these images, the words are not immediately perceptible; they must first be distinguished from the elaborate filigree of the keys. Auerbach enjoys ornamenting letters until they are nearly unrecognizable, which exaggerates the cognitive process of unlocking meaning from symbols. Much of Auerbach’s work centers on modes of written communication and the limits they place on expression.