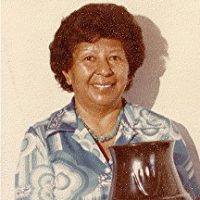 Avanyu is Tewa for “water serpent” and is the Tewa deity, the guardian of water. Avanyu is the “one who lives in the water below the earth, one who carries us through the water of change.” It symbolizes the importance for water to life in the desert and is also associated with lightning in the serpent’s tongue. The curves of the serpent’s body represent flowing water. Avanyu is believed to have birthed the waterways and has the voice of thunder. The sacred Avanyu lives in streams and is feathered with a turquoise horn in the middle of its forehead. The horn moves, sending rain for crops. When the Avanyu creeps on the ground and snaps its tail, it causes thunder, and when its tongue strikes out of it mouth, it causes lightening. Seeing the Avanyu it will bring luck and good health, and it means there is water nearby or that it will rain soon. The San Ildefonso and Santa Clara pueblos of New Mexico commonly use the Avanyu design in their pottery.

In the last 20 years of her life, she was perhaps the finest potter of carved blackware at Santa Clara Pueblo. She was known for her exceptional polish, refined lines and graceful designs. Her favorite design was the Avanyu (water serpent) as seen on this jar.

Teresita fired her pottery using cow chips instead of strips of bark. After the firing was almost complete, she covered the kiln with powdery dry horse manure in order for the firing to become one of reduction from its previous one of oxidation. This is what causes red pottery to turn black during firing. http://www.adobegallery.com/art/santa-clara-black-carved-jar-with-avanyu

Her pottery can be found in the permanent collection of museums nationwide including The National Museum of the American Indian, the Denver Art Museum and the Heard. Teresita Naranjo holds a place of historic significance in Santa Clara pottery, as she is considered the first to carve outside the linear band designs for her imagery. Her carving was always deep and crisp and the designs seems to flow gracefully around the surface. 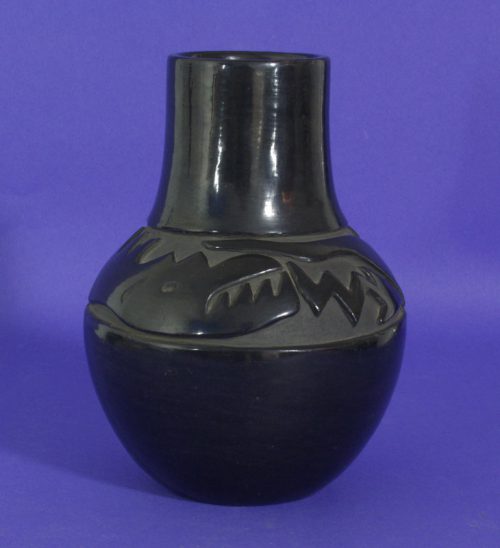