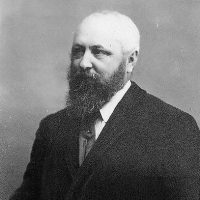 Born in 1861, Theodore Butler began his training as a student at the Art Students League in New York City in 1882 with William Merritt Chase. He then went to Paris, where he exhibited in Salon de Paris in 1888, and won an honorable mention for the painting, La Veuve. After this reward, Butler had some important one-man exhibitions at Vollard and Bernheim Jeune in Paris, and Durand Ruel in New York.

In July 1892, he married Suzanne Hoschede-Monet, Claude Monet’s stepdaughter and favorite model as illustrated in his painting Femme a L’ombrelle. When Suzanne died in 1899, Butler married yet another Monet stepdaughter, Marthe, in 1900.

Butler was able to experiment using different techniques from impressionism to post-impressionism without copying Claude Monet. He painted mainly in Giverny and its surroundings, but also in Yport, Veules Les Roses, and Honfleur. He also did some paintings in Paris and New York where he painted in the Hudson River Valley and was among the first Americans to paint New York state scenes in an impressionistic fashion. The birth of his two children gave him the opportunity to paint familial scenes indoors and outdoors.

Butler acted as an important resource for other Americans in Giverny well into the twentieth century. The Butler’s house was always a friendly place. Among his closest painter friends were Philip Hale, William Hart, Pierre Bonnard, and Maximilien Luce.