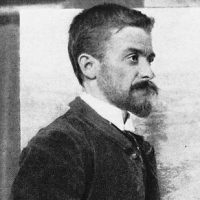 Long considered the first American impressionist, Theodore Robinson was born in Irasburg, Vermont, but spent most of his childhood in the rural Midwest, predominantly Wisconsin. Robinson’s formal art education began at the Art Institute of Chicago (1869–1870) and continued at the National Academy of Design in New York (1874–1876), where he was one of the founders of the Art Students League. In 1876 he journeyed to Paris and entered the atelier of the academician Carolus-Duran but later moved to the École des Beaux-Arts to study with Jean-Léon Gérôme. In the fall of 1879, Robinson moved to Venice; here he was befriended by American expatriate artist James Abbott McNeill Whistler, who had a great influence on him. Robinson returned to the United States in December of that year and began to work as a mural painter for public and private buildings in New York and Boston. By spring 1884 Robinson had earned enough money to return to France. With Paris as his home base, Robinson was able to travel to surrounding artistic sites including Barbizon and Dieppe, and to go to Holland. In 1887 he began his sojourns in Giverny, a village on the Seine where Claude Monet had established his home and studio, and he returned to that village every spring and summer for the next five years.

Although Monet generally avoided the many foreign artists who came to Giverny, he and Robinson became close friends. Like Monet, Robinson painted figure compositions and landscapes and also explored the concept of sequential images in a series of panoramic views of Giverny. During his Giverny period, Robinson continued to make trips back to New York, where he maintained friendships with Twachtman and Weir, and through them served as a conduit for the dissemination of Impressionist precepts in the United States. Duncan Phillips proclaimed that Robinson’s style “used the broken tones of Monet but refined the method and made it subtle and sensuous.”

To supplement his income, Robinson began teaching during the summers in Napanoch, New York, and later in a succession of teaching positions in New Jersey. In February 1895 Macbeth Gallery in New York gave him his first solo exhibition. Robinson died the next year during an acute asthma attack, an illness that had plagued him his entire life. Five of his paintings were lent posthumously to the 1913 Amory Show, in which he and Twachtman represented American impressionism.