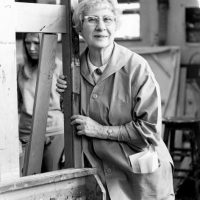 Coined as the matriarch of the Richmond, Virginia art community, Theresa Pollak not only founded Virginia Commonwealth University’s School of the Arts but also laid the city’s foundation for a thriving contemporary art scene and appreciation. In her early twenties, Pollak studied alongside Alexander Calder and Mark Rothko at the Art Students’ League of New York. She later attended the Hans Hofmann School of Painting in 1958 and travelled across Europe studying French Impressionism. These experiences directly influenced her approach to material and composition. In her work, which includes graphite and ink drawings, watercolor paintings and oil on canvas, her quality of line remains expressive and emotive. Pollak’s open-ended marks, scratchy yet elegant, etch out sources of light, moving fluidly from interior and exterior views. Capturing the places and people close to her, like the mountains of Virginia, the Richmond city streets outside her studio, and faces of her school peers, she offers us a window into her uniquely abstracted world. Theresa Pollak lived an incredible life through three centuries. In 1928, she founded the art department at the Richmond Professional Institute, which grew into Virginia Commonwealth University School of the Arts, now ranked as the number one public art school in America. She showed at The Whitney Museum of American Art in New York, The Corcoran Gallery, Washington, D.C., and The Virginia Museum of Fine Arts, among many others.