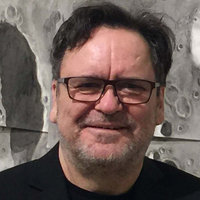 “In my watercolor installation, “Moon Mosaic – Challenger Craters” I have have focused on the details of the subject matter by breaking up the picture plane into individual works. This composition and tiled collage technique references space photomosaics assembled by space scientists to map the stars and planets. Since the first missions to space, countless space crafts have been taking photos this way. I have always been fascinated with this style of mapping, and in creating work of art based on this method, I have drawn my own map, choosing what I will depict and how it will be displayed. I have created an impression of the landscape from an unseen world.

The lunar site depicted in “Moon Mosaic – Challenger Craters” is located within the central part of South Pole-Aitken basin. The craters in this location are named after the crew on the Challenger Space Shuttle mission which ended with the loss of all seven crew members.” – Thomas Broadbent

Thomas Broadbent has shown extensively throughout the U.S. as well as internationally. Broadbent’s work won the Pulse Prize for best solo booth at New York Pulse Art Fair in 2016. His work was subsequently featured in “Mission to Space” at the Children’s Art Museum in New York. Broadbent’s numerous solo exhibitions include the Visual Art’s Center of New Jersey, Croxhapox Gallery (Gent, Belgium) Voorkamer Gallery (Lier, Belgium) Inspace gallery (Beijing, China) and the Newark Arts Council. Broadbent’s work has been reviewed in The New York Times, The New Jersey Star-Ledger, NY Arts, The Brooklyn Rail and numerous other publications. His work is represented by the Front Room Gallery.