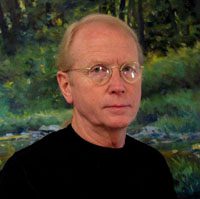 A native of Western Pennsylvania, McNickle paints country houses, woodlands, the open countryside, and most recently, Charleston and the South Carolina Lowcountry. Favoring a long, narrow format that is particularly suited to depicting the flat expanse of the land, his small paintings are done on location but his large watercolors are made in the studio from sketches, memory, and an occasional photograph. He received his Bachelor of Science in 1966, and 1972 graduated from Edinboro State University with a Masters in Education.