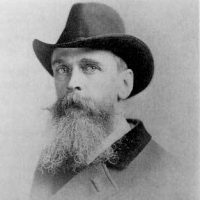 Thomas Moran began his artistic career as a teenage apprentice to the Philadelphia wood-engraving firm Scattergood & Telfer. After two years of training, he produced illustrations and works in watercolour and began developing lithographs of landscapes around the Great Lakes in the 1860s. Moran was introduced to the work of J. M. W. Turner while studying in England in 1862, and acknowledged Turner’s influence on his use of color and choice of landscapes. During the 1870s and 1880s Moran’s designs for wood-engraved illustrations appeared in major magazines and gift oriented publications.

Thomas Moran’s vision of the Western landscape was critical to the creation of Yellowstone National Park. Moran’s pencil and watercolor field sketches and paintings captured the grandeur and documented the extraordinary terrain and natural features of the Yellowstone region. Moran’s artwork was presented to members of Congress by park proponents. Along with the photographs of Yellowstone taken by William Henry Jackson, their images played an important role in convincing Congress to make the Yellowstone region a national park. [2]

Moran’s life and career took on new proportions when in 1871 Dr. Ferdinand Hayden, director of the United States Geological Survey, invited Moran, at the request of American financier Jay Cooke, to join Hayden and his expedition team into the unknown Yellowstone region. [3] Hayden was just to embark on his arduous journey when he received a letter from Cooke presenting Moran as.. “an artist of Philadelphia of rare genius..” [4] At his own expense, Moran agreed to join the survey team of the Hayden Geological Survey of 1871 in their exploration of the Yellowstone region and became the expedition’s official artist. [5] During forty days in the wilderness area, Moran visually documented over 30 different sites and produced a diary of the expedition’s progress and daily activities. His sketches, along with photographs produced by survey member William Henry Jackson, captured the nation’s attention and helped inspire Congress to establish the National Park System in 1916. The paintings of Moran along with the photographs of Jackson revealed the scale and splendor of the beautiful Yellowstone region more than Hayden’s oratory was able to, persuading President Grant and the US Congress that Yellowstone was to be preserved and made into a national park. Naturally proud of the role he played, Moran adopted a new signature: T-Y-M, Thomas “Yellowstone” Moran thereafter. [6]

After his involvement with Hayden expedition Moran began publishing his work in various periodicals and produced several large paintings, including The Great Canyon of the Yellowstone and Chasm in the Colorado, which were later purchased by the US Congress. Over the next forty years he traveled extensively. He was elected to the membership of the National Academy of Design in 1884 and produced a numerous works of art in his senior years. [6]