Worthington Whittredge was an American artist of the Hudson River School. He was a highly regarded artist of his time and was friends with several leading Hudson River School artists including Albert Bierstadt and Sanford Robinson Gifford. He served as president of the National Academy of Design from 1874 to 1875, and was a member of the selection committees for the 1876 Philadelphia Centennial Exposition and the 1878 Paris Exposition, both important venues for artists of the day.

Whittredge was born in a log cabin near Springfield, Ohio. He painted landscapes and portraits as a young man in Cincinnati before traveling to Europe in 1849 to further his artistic training. Arriving in Germany, he settled at the Dusseldorf Academy and studied with Emanuel Leutze. At Dusseldorf Whittredge befriended Bierstadt and posed for Leutze as both George Washington and a steersman in Leutze’s famous painting Washington Crossing the Delaware, now in the collection of the Metropolitan Museum of Art in New York City. Whittredge spent nearly ten years in Europe, meeting and travelling with other artists. He returned to the United States in 1859 and settled in New York City where he launched his career as a landscape artist.

Whittredge journeyed across the Great Plains to the Rocky Mountains in 1865 with Gifford and John Frederick Kensett. The trip resulted in some of Whittredge’s most important works-unusually oblong, spare landscapes that captured the stark beauty and linear horizon of the Plains.

Whittredge moved to Summit, New Jersey in 1880 where he continued to paint for the rest of his life. His paintings are now in the collections of numerous museums, including the Metropolitan Museum of Art in New York City and the Smithsonian American Art Museum in Washington, D.C. 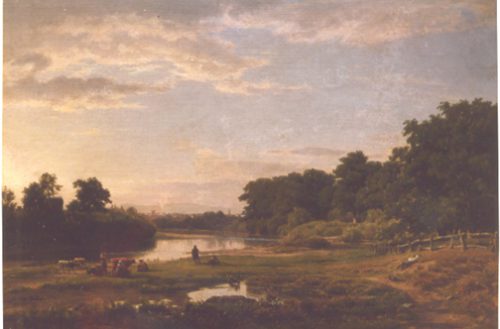