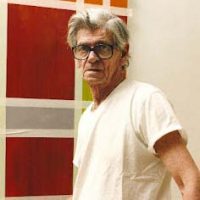 Lance Esplund on Willis
“With each new surprising series, Willis’s paintings get better and better–more direct, dynamic, and hardboiled. And this powerful new grouping which evolved out of (earlier) interlocking geometries…reminds us that he works not just in series, but cyclically.

Willis deals in the fusion of opposites: translucency and opacity;expansion and contraction; open and closed; tension and release. His paintings explore beginnings, first steps, and the building blocks of picture-making–the progression of point to line to plane; and of movement arrested in the plane…and whole planes of scratchy color churn with a flurry of brushwork, reminding us that flat color–vibrating, pulsing–needn’t sit there inactively.”
http://www.thorntonwillis.com/biography.shtml#perl

Thornton Willis is an American abstract painter. He has contributed to the New York School of painting since the late 1960s. Viewed as a member of the Third Generation of American Abstract Expressionists, his work is associated with Abstract Expressionism, Lyrical Abstraction, Process Art, Postminimalism, Bio-morphic Cubism (a term he coined) and Color Field painting.

Thornton Willis’s father, Willard Willis, was an evangelical preacher in the Church of Christ. Willis spent formative years in Montgomery Alabama, returning to graduate from Tate High School in Pensacola, Florida. After three years in the United States Marine Corps, Thornton Willis studied, under the G.I. Bill, at Auburn University for one year transferring to the University of Southern Mississippi where he graduated with a B.A. in 1962. In the summer of 1964, he enrolled at the University of Alabama, in Tuscaloosa, for graduate studies and received a teaching assistantship, and his M.A. in 1966. While at the University of Alabama he was befriended by the American football quarterback Joe Namath, met visiting artist Theodoros Stamos, and primarily studied painting with Melville Price, a painter who had shown in New York City with Franz Kline and Willem de Kooning and had been a member of The Club at the Cedar Tavern. During these years, Willis also participated in the Civil Rights Movement including the march from Selma to Montgomery, led by Martin Luther King, Jr.

Throughout his painting studies, Thornton Willis became highly influenced by the tenets of Abstract Expressionism embodied in The New York School of painting, including second generation painters such as Robert Rauschenberg and Jasper Johns. His early work was equally informed by the more reductive paintings of Piet Mondrian and Frank Stella. These two polarities, Expressionism and Cubism were the early foundations of his paintings and continue to inform his work to this day.

In 1967 Thornton Willis accepted a teaching position at Wagner College in Staten Island, and moved to New York City. He established his first studio in the Chelsea district of Manhattan. In 1968, he had his first one-person show at the Henri Gallery in Washington, DC. In New York, Willis met fellow painters, Dan Christensen, Jules Olitski, Ken Showell as well as sculptors and installation artists Richard Serra, Alan Saret, and Gordon Matta-Clark, all working out of a process art orientation.

The Slat Paintings
From 1967 to 1973, Thornton Willis worked on a series of paintings now called his “Slat Series” involving a “wet on wet” process working on the floor on large wet unstretched canvas and using rollers with long extension handles to develop striped bands across the entire picture plane. In 1970, Willis was included in the exhibition entitled “Lyrical Abstraction” curated by Larry Aldrich, and the painting from this show, “Wall”, 1969, acrylic on canvas, 96 inches by 114 inches, was originally exhibited at the Aldrich Museum of Contemporary Art, in Ridgefield, Connecticut. Some of the other artists connected with Lyrical Abstraction were Victoria Barr, Jake Berthot, Dan Christensen, Ronnie Landfield, Pat Lipsky, John Torreano, Phillip Wofford and Robert Zakanitch. When in 1971, Mr. Aldrich donated this collection to The Whitney Museum of American Art, John Baur, the museum director, mounted a second Lyrical Abstraction exhibition and Willis’s painting Wall became part of the Whitney Museum’s permanent collection.

The “Slat” series also attracted Bykert Gallery director, Klaus Kertess, and in 1971 Willis joined the Paley and Lowe Gallery, New York City, as part of its original stable of eight artists including, Joan Snyder, Mary Heilmann, Peter Pinchbeck, Herbert Schiffrin, Fred Gudziet, Mike Bakaty, Peter Bradley, and Michael Goldberg who joined later. A “Slat” painting was purchased by William Paley, then Chairman of the Board of CBS, and is now in The Museum of Broadcasting, NYC.

From 1971-1972, Willis taught painting at Louisiana State University in New Orleans. He had a one-person show of his “Slat” paintings at the Simonne Stern Gallery, New Orleans in 1970, and at The New Orleans Museum of Fine Art (then The Delgado Museum,) in 1971 which also owns a large slat painting. He continued to show with Simonne Stern through 1974.

The Wedge Paintings
After returning to New York City, Willis began his formalist compositions exploring Form and Field ambiguity that led to his “Wedge” series, 1974-1982. During this time he co-founded “Review: Artists on Art” with his wife. He showed his work at the Holly Solomon Gallery, NYC, in 1976, and in 1979 Thornton Willis won a Guggenheim Fellowship for painting. In the same year his work was included in the controversial exhibition “American Painting: The Eighties, a critical interpretation” organized and curated by Barbara Rose. The exhibition opened at the Grey Art Gallery, NYC and traveled first to The Houston Museum of Fine Arts, then to the American Center, Paris, France before traveling around the world as a United States Ambassadorial show to over twenty other countries.

In 1979, Thornton Willis exhibited his “Wedge” Paintings at the 55 Mercer Street Gallery where the work attracted the attention of British collectors, Robin Symes, and Charles and Doris Saatchi. He showed the “Wedge” paintings at the Sidney Janis Gallery, NYC, in 1980 is an exhibition entitled “Seven Young Americans” curated by Sam Hunter which included friend and fellow artist Sean Scully. In 1980 he had a one-person show at the Oscarsson Hood Gallery who would represent the artist until 1986. In 1980 he met the European dealer, Claes Nordenhake, and exhibited his “Wedge” paintings in Malmo, Sweden, Gothenburg, Sweden and Helsinki, Finland and Geneva, Switzerland.

In 1982, Willis began a series of overlapping “wedges’ or “double wedges’ that allowed exploration of the vertical colored bands created where the edges met. “Striped Suit”, 1982, a large double wedge canvas was featured on the cover of Arts Magazine with an essay by Steven Henry Madoff, Looking for Thornton Willis: A Treatise. With the re-opening of the Museum of Modern Art, NYC, in 1984, Willis exhibited Red Warrior in An International Survey of Recent Painting and Sculpture.[9] By 1984 the work had changed again as Willis sought a more complex geometry. By 1990 he had gone back to the triangle but this time in an overall grid for which he coined the term “biomorphic cubism”. The “Triangle” paintings would span a decade from 1990-2000.

The Triangle Paintings
In 1991, Willis showed new work at the Andre Emmerich Gallery, NYC, in an exhibition entitled Abstract Painting: the 90’s where art critic Barbara Rose chose to revisit certain painters from the 80s show. A one-person exhibition of large scale Triangle paintings and oil stick on paper followed in 1993, at the Andre Zarre Gallery where the artist employed a tight grid overridden by gesture and a plastic color palette. In the 2001 catalogue essay for Painted in New York City: The Presence of the Past, art critic Robert C. Morgan noted Willis’s Abstract Expressionist roots and the newer element of restraint.

In 2005, Willis teamed up with fellow painter, James Little for a two-person show in Williamsburg, Brooklyn at the Sideshow Gallery working with owner-painter, Richard Timperio. Since 2007, Willis has shown with the Elizabeth Harris Gallery in New York City, with one-person exhibitions in 2007, 2009 and 2011. Willis has sustained a long-term relationship with art dealer Harris begun in 1980 when she co-founded Oscarsson Hood Gallery, on 57th street.

The Grid Paintings
Shortly after the exhibition entitled Painting: 40 Years,” a retrospective at the Sideshow Gallery in 2007, Willis returned to a rectilinear format. Combining the early “Slat” paintings, with exploration of form and field in his “Wedge” series, he created a body of work he entitled “Lattices” where lines appear to weave forward and back. Michael Feldman documented the transition to this new work in a film, in 2008-09, Portrait of an American Painter. In 2009, Willis had a one person show at the Elizabeth Harris Gallery, with catalog entitled The Lattice Paintings essay, by James Panero of The New Criterion. In his essay, Panero writes, “Ever since his wedge paintings in 1970s, Thornton has played with the density of volumes, the interaction of colors to come forward and recede, and the character of the line.”

Two years later, in 2011, Willis took on form over field where form or volume appear to dominate the line. The resulting images harken to the dense mass of city buildings and maps. In an essay for this new series, Lance Esplund writes: “Those who have followed Willis’s work over the years may see his current series of paintings as a departure from “Slats” of the 1960s, the “Wedges,” or “Fins,” of the 1970s and early ’80s, the triangular facets of recent years, and the “Lattice” paintings from his last show, in 2009, at Elizabeth Harris. But all of these pictures have in common the allover surface plane held in tension, between figure and ground, as an interwoven field. They also share the subject of the urban landscape.”
Willis continued to show with Elizabeth Harris, and in April 2013, had a one-person show of new “Step” paintings. The artist included in the show, consisting predominantly of his paintings, several three dimensional painted wall pieces or assemblages. The wall sculptures, starting with a painted canvas base, are built up with layers of found objects and painted wood. Also in April and May 2013, two large paintings by Willis were exhibited at Gagosian Gallery, 980 Madison, New York, in the exhibition entitled, “Works of the Jenney Archive.” 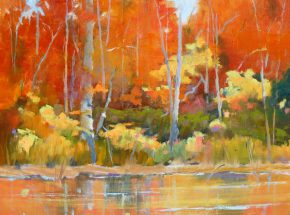