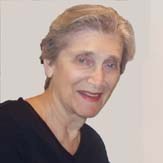 A Brooklyn native, Thyra Davidson born in 1925 studied at the National Academy and at the Brooklyn Museum Art School. Initially an abstract painter, she began in 1960 to create realist sculpture in the classical mode. Davidson’s classicism is of an intimate type – figures in informal and private moments rather than the standard ceremonial poses.

Davidson’s work is of exceptional interest, not only because true classical sculptors are so rare, but also because of the range of her subject matter. In addition to traditional portraits, free-standing figures, and figurative bas-reliefs, she sculpts still lifes embodying the objects – especially flowers – and drapery usually associated with painting. Not since Lucca Della Robbia in thirteenth-century Italy has a sculptor taken this most conventional subject matter and turned it into such a powerful and original statement. Her work projects the spirit of a Chardin in three dimensions.

Deceptively simple arrangements of drapery and fruit, an apple, pear, or banana, which our eyes are accustomed to seeing in color on a two-dimensional surface, take on an uncanny reality in three dimensions. Shown below eye level, they have a special presence that rivets the attention.

Drapery is one of the keys to Davidson’s aesthetic because it is simultaneously abstract and representational. The visual identity of folds and creases within the abstraction of the total design highlights the balance of form and content evident in all her work.

Whether she is creating drawings or sculptures, Thyra Davidson works slowly and methodically so that the result is a meaningful expression of her attitude toward the subject. She also refines each form within the pictures and sculptures so they convey the strength and dignity of the classical spirit. 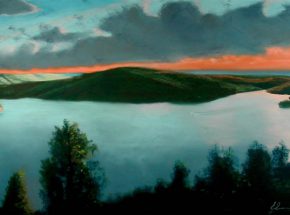