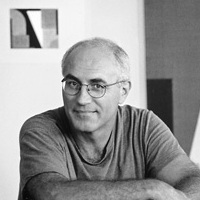 Timothy App is a contemporary American painter whose works are in numerous private and public collections including the Baltimore Museum of Art.

Timothy App attended Kent State University in Ohio, where he received a BFA degree in painting in 1970. He continued his study of painting at Tyler School of Art of Temple University and in 1974 received an MFA. During his thirty-two years of teaching, he has taught at Pomona College in California, the University of New Mexico in Albuquerque, and since 1990 at MICA. With many one-person and group exhibitions, he has shown his abstract paintings regionally, nationally and abroad. In 1988, his work was the focus of a 20-year survey exhibition. Most recently, his work from the last seven years was the subject of an exhibition with a catalog at Goya Contemporary in Baltimore, where his paintings and prints are represented. His work is included in many private and public collections. He is a recipient of a NEA fellowship in painting, as well as an individual artist’s grant from the Maryland State Arts Council. Twice he has received the Trustee’s Award for Excellence in Teaching at MICA, and has been nominated for the Richard C. Diebenkorn Teaching Fellowship. In addition to teaching and painting, he has written on the work of other artists, lectured on his own work and curated exhibitions of abstract painting.