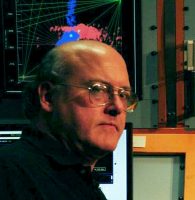 Todd Johnson earned his Bachelor of Science degree in Electrical Engineering from Michigan Tech in 1982. He works as a special projects specialist at Fermilab, America’s particle physics and accelerator laboratory in Batavia, Illinois.

“I have been experimenting with the connections between art and science since the 1990s, when my work focused on white light holography. In 2007 I began working with acrylic Lichtenberg figures, and during the seven years since then, I have attempted to push the process into increasingly complex forms. I enjoy the challenge of taming fundamental physical processes containing such large amounts of energy and have found that my design sense is maturing as my technical understanding of the possibilities and limitations of the process improves.

Art and science have always formed bridges between nations and cultures, as my career at a high energy physics laboratory has taught me. Both are universal languages we can all appreciate as we attempt to make sense of the world in which we find ourselves living.”

This acrylic slab (“Willow”) contains patterns known as Lichtenberg Figures, which are the result of an electrical discharge of several million volts. They are produced by exposing the acrylic to an electron beam from a particle accelerator. The electrons penetrate the plastic and come to rest at a depth determined by their energy, which can be chosen to be as high as five million electron volts. When the acrylic emerges from the accelerator it contains a layer of trapped electrons held under enormous electrical stress. Carefully striking the piece with a sharp insulated tool triggers the release of the trapped electrons, and they escape the acrylic with a bright flash and a loud pop. As the electrons rush toward the discharge site, the current reaches hundreds of amperes in less than a millionth of a second, vaporizing the acrylic and creating a permanent record of the intricate fractal tracks. This is not without an element of danger, as the artist may become part of the electrical path if sufficient precautions are not taken.

The vaporized patterns in Willow were formed into specific shapes by interposing a metal mask in the electron beam which only allowed certain regions of the acrylic to be charged. The result is a piece which reveals both the intent of the artist as well as the dictates of the laws of nature, producing details extending to the microscopic level. Although the overall shape of the patterns can be controlled, the structure of the discharge is unique and each piece is one of a kind. 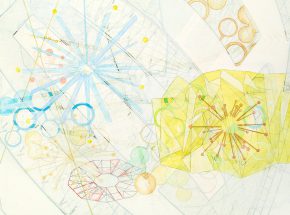