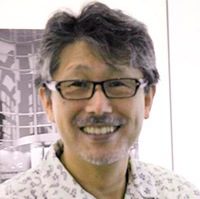 Tokihiro Sato is a Japanese photographer. Sato is best known for his unusual expressions of light and space and interpretations of performance and dance. Receiving his MFA and BFA in Music and Fine Arts from Tokyo National University of Fine Arts and Music in 1981, Sato was originally a trained sculptor, but decided to go with photography to better communicate his ideas.

Recognized for his playful interaction of light, Sato uses a large-format camera for exposures that last from one to three hours, while he moves through the space creating points of light or illuminated lines drawn with flashlights or flashes made by reflecting mirrors. The results are detailed photographs interrupted by patterns of light.[1] And because of the long exposures, Sato’s movements across the scene remain undetectable by the camera; the photograph captures his presence but not his image.
Sato’s photographs are held throughout the world in public and private museums including the Solomon R. Guggenheim Museum (New York); the Los Angeles County Museum of Art; the Museum of Fine Arts, Houston; The Art Institute of Chicago; the Cleveland Museum of Art; Museum of Modern Art (Saitama, Japan); Hara Museum of Contemporary Art (Tokyo); Queensland Art Gallery (Brisbane); and Tokyo Metropolitan Museum of Photography.[2] Solo museum exhibitions in the United States have taken place at the Cleveland Museum of Art (2003), The Art Institute of Chicago (2005), and the Frist Center for the Visual Arts in Nashville (2010).