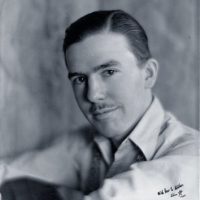 Tom Lea is a Texas legend who achieved national recognition for his painting, writing and illustrations.

Lea was born in El Paso, Texas to a frontier lawyer and his wife, Tom and Zola Utt Lea. After attending public schools in El Paso from 1912-1924, Lea attended the Chicago Art Institute from 1924- to 1926, where he studied under muralist, John Norton. From 1926 to 1933, he worked as a mural painter, commercial artist and art teacher in Chicago. He then moved to Santa Fe, where he worked on staff of the Laboratory of Anthropology, did illustrations for Santa Fe Magazine, and worked briefly for the WPA. Lea returned to El Paso in 1936, and competed for murals under the Treasury Department, Section of Fine Arts. He won competitions for murals in the Benjamin Franklin Post Office in Washington, D.C.; Hall of State, Texas State Fairgrounds, Dallas, Texas; Federal Building, El Paso, Texas; Burlington Railroad Station, Lacrosse, Wisconsin; Post Office, Pleasant Hill, Missouri; Post Office, Odessa, Texas; and, Post Office Seymour, Texas.

During these years (1936-1941), Lea also illustrated several books including Apache Gold and Yaqui Silver and The Longhorns by J. Frank Dobie. From 1941-1946, Lea served as a World War II correspondent for Life Magazine, traveling over 100,000 miles on assignments. He landed with the first assault wave of the First Marines on Peleliu on September 15,1944. He documented the experience in a book which he wrote and illustrated entitled Peleliu Landing (1945).

Following the war, Lea realized he could not express all he had to say visually, and so he turned to writing, completing two best-selling novels, The Brave Bulls (1949) and The Wonderful Country (1952). He illustrated each book, and both were turned into motion pictures. In addition to other works of fiction, Lea wrote and illustrated the two-volume history of The King Ranch in 1957. In 1968, he wrote his autobiography called A Picture Gallery, and in 1974, he wrote and illustrated In the Crucible of the Sun on the King Ranch properties in Australia. From that time, Tom Lea worked as a studio painter until he lost his eyesight in 1998.