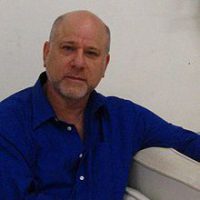 An artist and author, he works with painting, sculpture and computer visualizations. Robbin has had over 25 solo exhibitions of his painting and sculpture since his debut at the Whitney Museum of American Art in 1974, and has been included in over 100 group exhibitions in 12 countries.

He holds the patent for the application of Quasicrystal geometry to architecture, and has implemented this geometry for a large-scale architectural sculpture at the Danish Technical University in Kongens Lyngby, Denmark, as well as one for the city of Jacksonville, Florida. Tony Robbin is a pioneer in the computer visualization of four-dimensional geometry. Since 1981, his realtime rotation programs of four-dimensional figures have been useful for obtaining an intuitive feel for four-dimensional space, and quasicrystal space.

He has written several books and c.24 papers and articles.