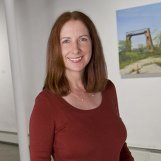 Valeri Larko is best known for her densely painted landscapes of the urban fringe, all of which she paints on location. She is attracted to the decaying and abandoned structures that populated the outskirts of America’s urban centers and the stories these places can tell.

In the fall of 2000 Valeri Larko was awarded a major mural commission from New Jersey Transit and the New Jersey State Council on the arts for the Secaucus Transfer Station. She painted four murals for their north mezzanine. Completed in August of 2003, the Secaucus Transfer Station is the largest train station in the state of New Jersey. Additional honors include grants from The Joyce Dutka Art Foundation, the George Sugarman Foundation, the New York Foundation for the Arts Strategic Opportunity Grant, a New Jersey State Council on the Arts Fellowship and an Artist in Residence Fellowship from the Newark Museum. Ms. Larko’s work is in the collections of the Jersey City Museum, The Montclair Museum, The New Jersey State Museum, Johnson and Johnson, Rutgers University and a number of other significant organizations.

Valeri Larko grew up in Lake Parsippany and lived in Northern NJ most of her life surrounded by endless miles of industrial parks, highways and shopping malls all of which have contributed to her fascination with the built environment. She was educated at the Du Cret School of the Arts, Plainfield, NJ and the Arts Students League, New York City, In 2004, Valerimoved from northern New Jersey to an artist loft building in New Rochelle, New York from which she is currently exploring the fringes of the Bronx, Brooklyn and Queens.