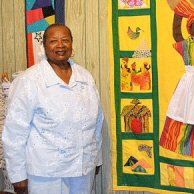 Gullah artists Vermelle “Bunny” Smith Rodrigues is a native of Georgetown, South Carolina. She received her Bachelor of Science degree in home economics from South Carolina State University, Orangeburg. She has been the owner of a specialty lace and fabric shop in Georgetown, and a boutique in Easton, Pennsylvania.
Bunny specializes in creating and fabricating story quilts and in recreating the folk art of the Carolina Low Country, Her story quilts are prized, sought after by private collectors and interior decorators. Her Gullah Ooman Story Quilt (a copy of which is on permanent display in the Children’s Museum of Houston, Texas) tells the story of the Gullah people, from a West African village to Emancipation from slavery in the Low Country. The story of the quilt is based on Bunny and her husband Andrew’s extensive research of African and Gullah South Carolina Low Country history, related African history, and the history of Africans in the Diaspora to the Americas. The Gullah Ooman Quilt also explains the role of the Gullah’s technological knowledge and physical labor in the successful development of open land cattle farming, and rice and indigo cultures that were the foundation of South Carolina’s extremely rich colonial agricultural economy, with rice continuing to be a mainstay into the twentieth century.
Bunny and Andrew use the story quilt as a teaching tool in lectures in their Gullah Ooman Museum on Pawleys Island.
Gullah Ooman History Quilt
This quilt depicts the origin of Man, life in Africa before the first Europeans arrived, and the enslavement of African people. It also depicts the horrors of the Middle Passage, and white America’s use and abuse of enslaved Africans and Gullahs who were the economic backbone of Colonial America. Finally it depicts the physical Emancipation of the Gullah and other African peoples. Clockwise from bottom left:
1. Pyramids – Africa, the origin of all mankind and the Motherland of all African American.
2. House – a peaceful African village in a pastoral agrarian society.
3. People – enjoying village life before the first Europeans arrival.
4. Dove of Peace and Enslavement Net – The first Europeans arrived and were handed the dove of peace; in turn they captured the Africans for the transatlantic slave trade.
5. Slave Ship – slave traders and the beginning of the African diaspora.
6. African holding pens – slaves were held on the West African coast and sea islands (Bunce, Elmina, Goree, and Cape Verde).
7. Middle Passage – (top) the horror, and the bones of millions of African ancestors at the bottom of the Atlantic – those who died or were killed during passage, on the same route that hurricanes now travel.
8. American Holding Pens – Sullivan Island, where 40% of our ancestors entered the American “door of no return” into bondage and despair.
9. Auction Block – slaves were sold as if they were the same as horses or cattle, and the rawhide whip of the overseer.
10. Big House – a planter’s house and outbuildings built by enslaved African craftsmen, symbolizing all that was dehumanizing and evil in slavery, and the many thousands of Africans and Gullahs who lived and died in swampy, pestilence ridden rice fields ante-bellum South Carolina and America wealthy.
11. Big Mama – symbolic of all women on the plantation who did it all – physician, mid-wife, psychiatrist, mediator, liberator, sometimes involuntary mistress to the enslaver, she did all the work of a man, except the heaviest.
12. Staple Crop Field – the sizzling sun on cattle ranges, rice, indigo, and cotton fields where Africans and Gullah not only slave, but taught the Europeans the African methods of such farming, making the Carolinas one of the richest agricultural societies in the 18th century.
13. Religious Building – Traditional African religion – Islamic, Judaic, Christian – that helped us keep faith, through a living hell; until Emancipation, when we were given “nothing but freedom.” The church represents “Watch Night Service,” Dec. 31, 1862. [President Lincoln’s Emancipation Proclamation became law Jan. 1, 1863.]
The centerpiece depicts the strong “Gullah Ooman” who carried and still carries our dreams, hopes, and aspirations; who taught us then and now how to survive in a hostile environment; and through it all, gave us strength to endure then and now.
@ Vermelle “Bunny” Smith Rodrigues