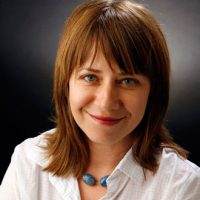 Vesna Pavlovic’s photographs are meditations on vision that force her audience to consider the power of seeing and being seen. In her Watching series, Pavlovic photographed spectators watching basketball, a popular sport in Serbian culture. The photographs depict the often intense emotions of spectatorship. Pavlovic then adds another layer of meaning to her work by deliberately frustrating her viewers by denying them the knowledge of exactly what her subjects are observing. Her viewers are themselves fully engaged in the dialogue of her pieces, as they are also observers reacting to what they see.

Pavlovic earned a Bachelor of Fine Arts degree from the University of Belgrade and a Master of Fine Arts degree from Columbia University in New York, and has exhibited her work around Europe and the United States. She has been awarded numerous grants and residencies and her work can be found in public collections, including the Museum of Contemporary Art in Belgrade. She currently lives in Nashville, Tennessee, where she is an Assistant Professor of Art at Vanderbilt University.