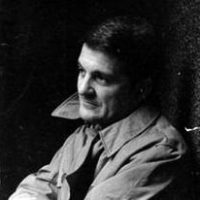 Vincentiu Grigorescu was an Italian painter of Romanian-Greek origin. He began his artistic career in 1938 with several still life paintings and later enrolled at the University of Bucharest. In that same year, 1944, he voluntarily enlisted as a paratrooper in the Romanian armed forces fighting Nazism. He was later wounded in action and decorated.
Grigorescu’s early studies focused mainly on the works of Van Gogh, Cezanne, and the Modern Art of Duchamp. Not surprisingly, his own paintings ranged from still life to abstract works. Grigorescu fell under heavy criticism for his abstract work as the Romanian Communist authorities openly accused him of “formalism.” In opposition to the regime’s ideological fixation on the doctrine of “socialist realism”— realistic form and socialist content— Grigorescu’s abstraction became increasingly daring and rapidly gained international recognition.
In the 1960’s and early 70’s, Grigorescu remained in Romania, but exhibited across Europe and in Cuba. Elected Secretary of the Romanian Artists’ Union for Graphics, he resigned in protest in 1971 after years of political disputes with the Ceausescu regime. The following year he went into exile in Italy, where he was given political asylum and eventually citizenship.
Grigorescu become known for geometric abstractionism and exhibited alongside Enrico Castellani, Piero Manzoni, Agostino Bonalumi, Alberto Burri, and Lucio Fontana. He never returned to his country of birth.