Virginia Stroud: “……..a viewer approaches a painting. The painting greets the viewer. The space between the painting and the viewer is where the spirit world lives. That small space separates us.”

Of Cherokee and Creek descent, Virginia Alice Stroud was born in Madera, California. She was educated in public schools in California and Oklahoma, and graduated from Muskogee, Oklahoma Central High School in 1969. Virginia attended Bacone Junior College In Oklahoma from 1969-1970 and the University of Oklahoma, 1971-73, summer 1975, and 1976-77, majoring in elementary education and art.

Over the past thirty years, Virginia Stroud has established herself as a leading contemporary Native American artist and has compiled an impressive record in the process. The above quote typifies her concept of aesthetic values and the objectives she attempts to achieve in her paintings. Her objectives are and methodology is further exemplified when she states, “As an artist I touch the human chord that erases the multicultural boundaries and ask the viewer to look for the familiar and not the differences of humanity.”

Continuing in the earliest traditional painting style, she does not paint the facial features, and individual identity passes into the background. Characters are recognized by their clothing and their identities are established by their roles. This is especially true of the Native American women whose “role as caretaker, nurturer, gatherer and spiritual instructor remained the same, handed down from one generation of daughters to another.” Identity is established by what is familiar to a culture, and the viewer is asked to both recognize the differences through identity and to overlook those differences, thereby enriching the spiritual world by minimizing the distance between themselves and the art.

“I paint for my people. Art is a way for our culture to survive…perhaps the only way. More than anything, I want to become an orator, to share with others the oldest of Indian traditions. I want people to look back at my work just like today we’re looking back at the ledger drawings and seeing how it was then. I’m working one hundred years in front of those people and saying ‘this is how we still do it…we still have our traditions.'” 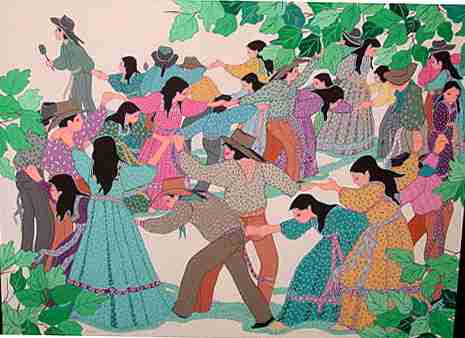 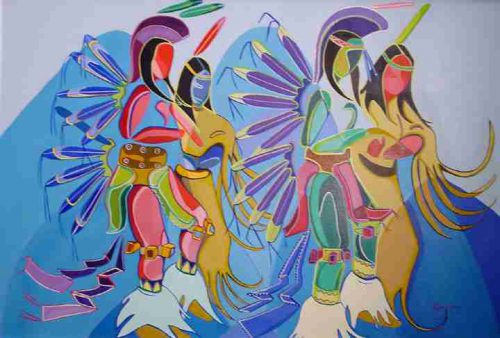