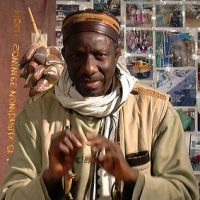 Often incorporating local raw and recycled materials, Viyé Diba’s works incorporate elements of painting, sculpture, installation, and performance. In Robinet, Diba traced out and replicated the contour of an imported Chinese faucet that he had to replace seven times, covering an entire canvas in an abstract pattern. The gray shapes fill the frame under a transparent film of toile, and are visible through a window-like sheet of cellophane. The number “421” is written on top of the window in a reference to the total number of faucets depicted on the canvas. With a pristine geometric abstraction, the piece demonstrates the repetition of wastefulness in twenty-first-century life.

Diba studied art education at the National School of Fine Arts in Dakar and received a PhD in urban geography from the University of Nice, France. Currently a Professor of Visual Arts at the National School of Arts of Dakar, Diba serves as the president of the National Senegalese Association of Visual Artists. He is also a member of the Economic and Social Council of the Republic of Senegal and the Scientific Commission at the Biennale de Dakar. His work was featured in the solo exhibition Environnement temoin culturel at the National Gallery, Dakar (1990), and has been included in numerous international exhibitions, including the 2010 and 1998 Dak’Art Biennial; 1995 and 1997 Johannesburg Biennale; and 1993 Biennale d ’Abidjan, among others. Diba currently lives and works in Dakar. 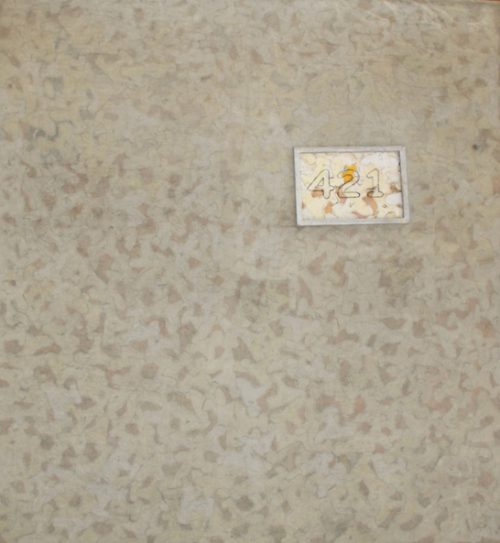