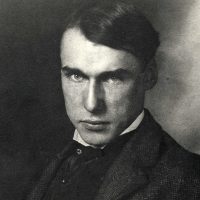 Walter Kuhn was born in Brooklyn, New York. His father, Francis Kuhn, was the owner of a ship provisioning business and several New York hotels. Kuhn’s mother, Amelia Hergehan, introduced her son to art and theater at a young age. From this point forward, Kuhn’s lifelong interest in art, theater and the circus began. For the remainder of his life, employment in the entertainment industry acted as a second career and source of income for the artist. More importantly, it provided limitless inspiration for his canvases.

At the age of 15, Kuhn sold his first drawings to a magazine and began to sign his name “Walt.” In 1893, he enrolled in evening art classes at the Brooklyn Polytechnic Institute. However, he soon lost interest in becoming an artist and instead, decided to open a bicycle shop in Brooklyn. In his lifetime, Kuhn would become known for his impulsive, yet dedicated personality.

By 1899, Kuhn had become enamored with ideas of the American West, and with only $60 in his pocket, he set out for California. Upon his arrival in San Francisco, he again took up the pen and became a cartoonist for WASP magazine. In 1901, the young artist departed for Paris, where he enrolled in formal art classes at the Academy Colarossi. Finding too little discipline for his liking in Paris, Kuhn soon left for the Royal Academy in Munich, where he studied under Barbizon painter Heinrich von Zugel (1850-1941).

In 1903, he returned to New York and immersed himself in the booming art scene. While continuing to work as an illustrator for local journals, he helped manage the Kit Kat Club- an organization that raised funds for scholarships at the National Academy of Design. In 1905, he held his first exhibition at the artist run, Salmagundi Club, establishing himself as both a cartoonist and a serious painter. That same year, he submitted his first illustrations to LIFE magazine.

Kuhn regularly spent his summers in Fort Lee, NJ— one of the early homes of the movie industry. The area provided the maturing artist with the creative environment he needed to thrive. When the New York School of Art moved to the area in the summer of 1908, Kuhn joined the faculty. However, he soon came to dislike his experience as an instructor, and when the school moved back to New York, he also went along- only this time, in separate ways. Upon his return, he married Vera Spier. The couple had one child, a daughter Brenda Kuhn.

While his home life was beginning to blossom, so was his career. In 1909, he spent the year preparing his first one-man exhibition for the Madison Gallery in New York. The show proved to be a huge success. Soon after, Kuhn took part in establishing the Association of American Painters and Sculptors- the organization responsible for the landmark Armory Show of 1913. As the executive secretary, he was responsible for finding artists to participate. The Armory Show, which displayed both European and American modern art to New York audiences for the first time, proved to be a huge success de scandale. In 1938, Kuhn published an “insider’s” viewpoint to the event in his seminal essay, “The Story of the Armory Show.” Following the exhibition, Kuhn began to explore new ways for artists to break established barriers. In 1917, he founded the Penguin Club, an organization where artists held open meetings and provided criticism for each other.

By 1925, Kuhn’s health had taken a dramatic turn when a duodenal ulcer almost killed him. After a prolonged recovery, he eventually joined the faculty of the Art Student’s League. He also took up a commission for the Union Pacific Railroad, in which he completed designs for new club cars. Almost foreseeing the end of his career, the aging artist organized his first retrospective in 1939, which took the form of a book titled, Fifty Paintings by Walt Kuhn.

By the 1940s, Kuhn’s eccentric behavior began to take on unstable forms that had never surfaced before. He became increasingly distant, and when the Ringling Brothers, Barnum and Bailey Circus was in town, he religiously attended. In consequence, his unsound demeanor did not go unnoticed, and in 1948, he was institutionalized.

Kuhn’s last years are marked with tragedy and remain a mystery. Rumors of attempted suicides plague his biographies. Nonetheless, on July 13, 1949, he died instantly from a perforated ulcer. In a bittersweet act, Vera and Brenda Kuhn placed his favorite drawing pen in his jacket pocket prior to his wake.