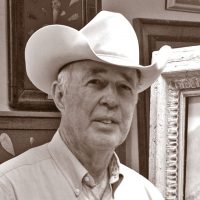 In his art, Wayne depicts the contemporary cowboy and gives honor to the cowboy way of life. In 2000, Wayne received the “Western Artists of the Year Award” from the Academy of Western Artists, and in 2004, he won the “American Cowboy Culture Award for Western Art.” Wayne was voted to membership in the Cowboy Artists of America in 1995. He has served as Vice President and Director in prior years and President of the organization in 2006–2007. Like many of the CAA, Wayne would say that being a member has been the highest honor of his professional career and that he has been inspired by the work of emeritus member, Tom Ryan.

Wayne Baize knows about Hereford cattle; their distinctive white faces often a trademark of his paintings of contemporary ranch work. He runs Herefords on his ranch and his in-laws are long-time breeders of top quality Herefords.

Galleries around the country show Wayne’s work. They include Midland Gallery in Midland, Texas, and Trailside Galleries in Jackson, Wyoming, and Scottsdale, Arizona.

Wayne and his wife, Ellen, make their home in the mountain country outside of Ft. Davis, Texas.