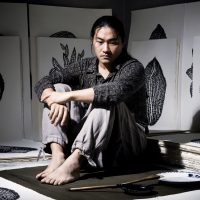 Namgoong Whan, a graduate of Seoul National University and École Nationale Supérieure des Beaux-Arts in France, works in both Korea and France. His major works of art include the

The term “transmigration”, the title of Namgoong’s ink dot series, is a Buddhist term that means the cycle of life, former life or migration of soul. Under the highly religious connotation of the term, he uses uncountable ink dots to express the circulation of energy. The dots merge into circular swarms that remind of unidentifiable animals and plants. What gives life to these new creatures is the space between the dots which channels the circulation of energy. The energy accumulated at the end of his brush is absorbed into the canvas and spread out to other dots. Though different pieces from different times show different levels of energy, the energy continues to flow inside his works. The Transmigration series has its significance, not as a final outcome, but as a record of the decisions he made throughout the work process. The series tell the audience the story of his discipline, devotion and concentration.

This intensity, which seems to abstract the viability of metamorphosing organisms, the condensation and implosion of energy, and even religious exultation, is the consequence not only of his technical skillfulness but also of his deep immersion in the working process that is as much as performance art.
Yoo, Jin sang (Professor at Kaywon School of Arts and Design)

Namgoong Whan has been working with the concept of “souffle” since 1998 when he was still in college. Since he presented his first

Paintings painted with colors as seen by eyes do give information about the painting through its colors. However, I have always wanted to see the other side of what eyes can see, the things that are always there but cannot be seen. Those are probably what keep us going … A migration from one spot to another eventually becomes a part of a bigger being. A circulation that began in the nucleus goes back into the nucleus in the end.