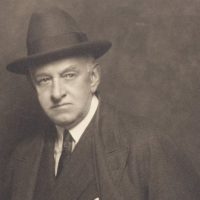 Willard Leroy Metcalf was born in Lowell, Massachusetts. Showing artist talent at an early age, his parents allowed him to serve as an apprentice to a wood engraver and to study under George Loring Brown, a prominent portrait and landscape painter of the time. He also took life drawing classes at the Lowell Institute becoming the first student to earn a scholarship to the Museum of Fine Arts school in Boston, which he attended from 1877-78.

From 1883 to 1889 Metcalf lived in France where he studied at the Academie Julian under Gustave Boulanger and Jules Joseph Lefebvre. He traveled and painted in Brittany and Normandy, and studied with Claude Monet at Giverny in 1886. The following year, he visited North Africa.

Returning to the U.S., Metcalf eventually settled in New York where he taught briefly at the Art Students League and for ten years at the Cooper Union. He began to move away from his academic training to paint light-filled, loosely rendered impressionist landscapes favored by many of his American contemporaries. In 1898, Metcalf joined with nine other Impressionists, including Childe Hassam, John Henry Twachtman, Julian Alden Weir, and Thomas Dewing, to form an exhibiting group that became known as The Ten American Painters.