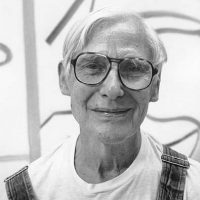 Willem de Kooning was born on April 24, 1904, into a working class family in Rotterdam, the Netherlands. Driven by an acutely perceptive mind, a strong work ethic, and persistent self doubt – coupled with the determination to achieve – the charismatic de Kooning became one of America’s and the twentieth century’s most influential artists.

Showing an interest in art from an early age, de Kooning was apprenticed to a leading design firm when he was twelve and, with its encouragement, enrolled in night school at the prestigious Rotterdam Academy of Fine Arts and Techniques (Academie van Beeldende Kunsten en Technische Wetenschappen te Rotterdam), which was renamed in his honor in 1998 as the Willem de Kooning Academie. With the help of his friend, Leo Cohan, in 1926 he stowed away on a ship to the United States, settling in New York City in 1927. At that point, it was not the life of an artist that he was in search of; rather, like many young Europeans, it was the movie version of the American dream (big money, girls, cowboys, etc.). Nevertheless, after briefly working as a house painter, he established himself as a commercial artist and became immersed in his own painting and the New York art world, befriending such artists as Stuart Davis and Arshile Gorky.

In 1936, during the Great Depression, de Kooning worked in the mural division of the Works Project Administration (WPA). The experience convinced him to take up painting full time. By the late forties and early fifties, de Kooning and his New York contemporaries, including Jackson Pollock, Franz Kline, Robert Motherwell, Adolph Gottlieb, Ad Reinhardt, Barnett Newman and Mark Rothko, became notorious for rejecting the accepted stylistic norms such as Regionalism, Surrealism and Cubism by dissolving the relationship between foreground and background and using paint to create emotive, abstract gestures. This movement was variously labeled “Action Painting,” “Abstract Expressionism” or simply the “New York School.” Until this time, Paris had been considered the center of the avant-garde, and the groundbreaking nature of Picasso’s contributions was frustratingly difficult to surpass for this group of highly competitive New York artists. De Kooning said it plainly: “Picasso is the man to beat.”[i] De Kooning and this group finally stole the spotlight and were responsible for the historic shift of attention to New York in the years following World War II.

De Kooning became known as an “artist’s artist” among his peers in New York and then gained critical acclaim in 1948 with his first one-man exhibition held at Charles Egan Gallery, at the age of forty-four. The exhibition revealed densely worked oil and enamel paintings, including his now well-known black-and-white paintings. This exhibition was essential to de Kooning’s reputation. Shortly thereafter, in 1951, de Kooning made one of his first major sales when he received the Logan Medal and Purchase Prize from the Art Institute of Chicago for his grand-scale abstraction, Excavation (1950). This is arguably one of the most important paintings of the twentieth century. During this period, de Kooning gained the support of Clement Greenberg and later Harold Rosenberg, the two foremost and rivaling critics in New York.

De Kooning’s success did not dampen his need for exploration and experimentation. In 1953, he shocked the art world by exhibiting a series of aggressively painted figural works, commonly known as the “Women” paintings. These women were types or icons more than portraits of individuals. His return to figuration was perceived by some as a betrayal of Abstract Expressionist principles, which emphasized abstraction. He lost Greenberg’s support, yet Rosenberg remained convinced of his relevance. The Museum of Modern Art, New York, accepted de Kooning’s change in style as an advancement in his work and purchased Woman I (1950 – 1952) in 1953. What seemed to some as stylistically reactionary, to others was clearly avant-garde.

De Kooning’s dramatic rise to prominence between 1948 and 1953 was only the first act in a remarkable artistic career. While many of his contemporaries developed a mature “signature style,” de Kooning’s inquisitive spirit did not allow such constraint. Fighting adherence to any orthodoxy, he continued to explore new styles and methods, often challenging his own facility. “You have to change to stay the same,”[ii] is his frequently quoted adage.

De Kooning was equally comfortable working on paper and canvas. In fact, paper allowed for an immediacy that appealed to him. From September 1959 to January 1960, de Kooning stayed in Italy, during which time he produced a large number of experimental black-and-white works on paper known as the “Rome” drawings. After his return, he traveled to the West Coast. While in San Francisco, he worked with brush and ink, but, more interesting, he experimented with lithography. The two resulting prints (known as Waves I and Waves II) became prime examples of Abstract Expressionist printmaking.

By the late fifties, he had moved from women, to women in landscapes, to what seemed to be a return to “pure” abstraction, with works respectively referred to as “Urban,” “Parkway” and “Pastoral” landscapes; yet he never completely left the world of actual objects for pure abstraction. In 1960, he said, “It’s really absurd to make an image, like a human image, with paint today, when you think about it, since we have this problem of doing or not doing it. But then all of a sudden it was even more absurd not to do it. So I fear that I’ll have to follow my desires.”[iii] The figure reasserted itself, now in its more carnal form.

In 1963, de Kooning moved from New York City to Springs, in East Hampton, Long Island. Manipulating space as a sculptor would, he designed and built a soaring, butterfly-roofed, light-filled studio and home in a quiet, wooded neighborhood where he worked through the sixties before moving in permanently in 1971. The light and landscape of East Hampton reminded him of his native Holland, and the change in environment was reflected in his work. Colors softened and figures became loosely painted and fleshy, more “go-go” girl and “come hither” than angry and tooth-filled. He continued to experiment with his medium, adding water and safflower oil to make it slippery and wet, formulating what would seem to many an extremely difficult mixture to handle.

On a brief trip to Italy in 1969, after encountering a sculptor friend, Herzl Emmanuel, de Kooning produced thirteen small figures in clay, which were editioned in bronze. In the early seventies he explored both sculpture and lithography, producing a sizable body of work while continuing to paint and draw. In this period, more graphic elements appear in his paintings, some with flat applications of paint as opposed to a more painterly approach. This may derive from his exposure to Japanese art and design while in Japan in early 1970. His lithographs seem to reflect the influence of Japanese ink drawing and calligraphy as many exhibit a newly gained sense of open space, which in turn is also reflected in some of the paintings. The 1970s decade was marked first by material experimentation and then by breakthrough. Because of or in spite of the explorations, the late 1970s were a prolific period in which he produced voluptuous, thickly painted works which are among his most sensually abstract.

Visual struggle and wrestling are markers of much of de Kooning’s career. He was fortunate in his final decade to dispel some of the angst. Coming out of a methodology of sanding, drawing, layering, scraping, rotating the canvas and repeatedly stepping back to consider each change, the pared-down and at times serene paintings of the eighties can be seen as de Kooning’s ultimate synthesis of figuration and abstraction, of painting and drawing, and of balance and imbalance. Year after year throughout the 1980s, de Kooning explored new forms of pictorial space as revealed by works with ethereal ribbon-like passages; or some with cantilevers whereby straight lines may float or abruptly stop and balance against broad open areas; or others of crammed, bold, lyrical spaces. Vividly colored, predominately linear elements were juxtaposed against subtly toned white areas. With his avowed inclination to embrace the “ordinary,” he was free to acknowledge the unintellectual, mundane or humorous characters or objects at times perceptible in his abstract paintings. This again exemplifies his insistence on freedom from doctrinaire ideas of what art should be. It is also reflected in the spontaneity and simplicity of the light-hearted titles he gave to a few works in the 1980s, for example: The Key and the Parade, The Cat’s Meow and A Deer and the Lampshade. De Kooning had reached a more thoroughly open, less anxiously complex place in his artistic career.

Succumbing to the affects of old age and dementia, de Kooning worked on his last painting in 1991 and passed away in 1997 at the age of 92, after an extraordinarily long, rich and successful career. De Kooning never stopped exploring and expanding the possibilities of his craft, leaving an indelible mark on American and international artists and viewers.

De Kooning was awarded many honors in his lifetime, including The Presidential Medal of Freedom in 1964. His works have been included in thousands of exhibitions and are in the permanent collections of many of the finest art institutions abroad, including the Stedelijk Museum, Amsterdam; Tate Modern, London; and the National Gallery of Australia, Canberra; and in America such as The Museum of Modern Art, New York; The Metropolitan Museum of Art, New York; the Art Institute of Chicago; the Smithsonian Institution’s Hirshhorn Museum & Sculpture Garden, Washington D.C.; and the National Gallery of Art, Washington, D.C. 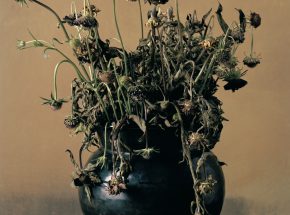 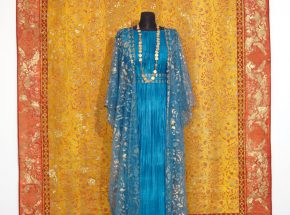