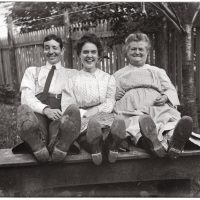 William S. Bullard, born in Worcester, Massachusetts in 1876, took over 5400 photographs over the course of his 41-year life. Never owning a studio, Bullard roamed his Beaver Brook neighborhood and other parts of the city, capturing people in their surroundings, his camera strapped to the back of his bicycle. Bullard also traveled far beyond Worcester—by trolley, train, and wagon—to forty-five different communities around New England and as far afield as Buffalo, New York. His subjects reflect his wide-ranging interests—portraits, streetscapes, trains, trolleys, parades and military encampments.

Bullard’s training remains a mystery. His photographs reflect a high degree of skill but no evidence exists of professional training or even membership in local camera clubs. Beginning in 1901 and continuing to 1908, Bullard listed himself as a photographer in the Worcester city directory. Before that time, he identified himself as a laborer, and likely aided his mother in her boarding house on Mayfield Street. In 1908, he moved with his mother to the Bullard family farm in North Brookfield, Massachusetts. While his output declined after leaving Worcester, he continued to travel and photograph parades and streetscapes in the area and beyond. Bullard committed suicide in April 1918 at the age of forty-one, suffering from ill health and despondent about his mother’s death. He is buried next to his mother in Putnam, Connecticut.