William Brown Cooper was born in 1811 in Tennessee but, like many artists of his generation, spent a significant amount of time in Europe, studying under famous artists and seeing the works of the old masters. Upon his return to the United States, he painted around the country over the next 15 years, and by 1860 he was painting and teaching in Nashville, Tennessee. Cooper often signed his paintings the same way as his older brother Washington Bogart Cooper did. Both signed their work as “W.B. Cooper” coupled with their painting similar style, made it hard to know who painted what.

His 1856 portrait of Andrew Johnson depicted him as a dignified man surrounded by the trappings of knowledge and culture: fine furnishings, classical architecture, and an idealized landscape background. This portrait was painted nine years before Johnson became president when he was still governor of Tennessee. Johnson would later serve as Abraham Lincoln’s vice president, becoming president after Lincoln’s assassination in 1865. 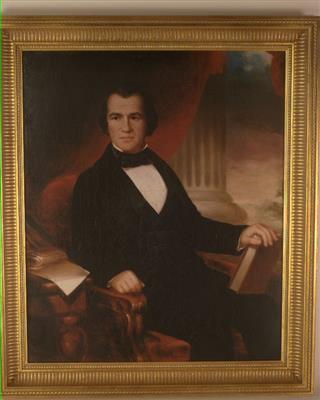