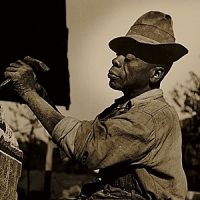 William Edmondson was born around 1874 in Davidson County, Tennessee. The exact year of his birth is not certain because of a fire that destroyed the family Bible. He was one of the six children of George and Jane Edmondson. He grew up in Nashville and started working at the age of sixteen. During these years, he worked as a manual laborer, fireman, railroad man at St. Louis Railroad, and hospital janitor at Women’s hospital. He performed these menial jobs for almost twenty five years. He never learned how to read or write. He did not marry anyone and shared the family home with his mother and unmarried sister after his father’s death. Following the deaths of his mother and sister and his retirement from hospital in 1932, he did some part-time jobs, sold vegetables that he grew in his backyard and lived alone for the rest of his life.

He became a convert around 1934 and attended United Primitive Church and remained dedicated to his religion. Edmondson entered the world of sculpture by a divine command. He received a vision from God, who told him to start sculpting. He began his career by working on tombstones. He worked exclusively with limestones which were delivered to him by the wrecking companies’ trucks. His work was influenced by the United Primitive Baptist Church ideas. His sculptures are simple and emphatic forms ranging from one to three feet in height. He carved the figures biblical characters, angels, doves, women, turtles, American eagles, rabbits, horses and other critters and “miracles”. He sold his sculptures along with selling vegetables. He also frequently provided tombstones for members of Nashville’s Afro-American Community.

About five years later, his art was recognized by Sidney Hirsch, Alfred and Elizabeth Starr, and Louise Dahl-Wolfe. Dahl-Wolfe was a photographer working for Harper’s Bazaar Magazine. She brought Edmondson’s sculptures to the attention of Alfred Barr, who was the director of the Museum of Modern Art at New York. They expressed interest in his work and Edmondson was accorded a one-man show at that Museum in 1937.

In 1938, his sculpture was included in the “Three Centuries of Art in the United States”. Then in 1941, he was also given a one-man show at the Nashville Art Gallery. His pieces were included in other art exhibits in the nation.

Edmondson’s career lasted for about fifteen years. During some of these years, he worked under the Works Progress Administration, a government sponsored artists’ relief program. However, he was free to create carvings of his choice. In the 1940s, his health began to fail and he had cancer. During the last few years of his life, he worked with small blocks of limestone. He died on February 8, 1951 in Nashville, TN. He was buried in an unmarked grave in Mt. Ararat Cemetery in Nashville.