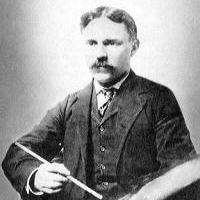 William F. Paskell was born in London and moved to Boston in 1872 with his family. By the age of twenty-one he was already mentioned in the press as a very promising artist, with his paintings hanging beside the work of Childe Hassam and John J. Enneking in the annual Boston Art Club exhibitions. Paskell married in 1900 and by 1905 had four children. In order to provide for his family, Paskell pushed his paintings on the market faster then the market could absorb them and thus depressed the prices of his own works. However, after years of neglect, Paskell’s paintings are gradually earning the respect they deserve.

Paskell started painting a fairly tight style of impressionism, and gradually reached a loose impressionistic style before World War I. He told one of his grandchildren that to be best appreciated, his large landscape paintings had to be seen at twenty-five feet or more. Paskell painted up to the day of his death, dying in Boston at the age of eighty-five, in humble circumstances. He is considered one of the last “White Mountain School of Painters” with a connection to the 19th century. He painted both watercolors and oils. His paintings were exhibited at the Boston Art Club.