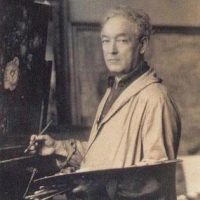 William James Glackens was an American landscape and genre painter and illustrator, born in Philadelphia. An illustrator for Philadelphia and New York City newspapers and magazines for many years, Glackens first exhibited his paintings with the Eight (the so-called “Ash Can School”)and achieved fame as a brilliant painter of the contemporary scene. In his early works he used a dark palette. After living in Paris, he adapted the technique of the French impressionist school and turned to a brighter range of colors. He was particularly influenced by Renoir. He is well represented in the Barnes Foundation, Merion, Pa., and other leading American collections.